The Movie Subtitles ESL Activity helps develop students’ writing skills by watching films. It can be used with movies and films on YouTube or other movie sites. Students should create their own dialog from what they see with the volume turned down. 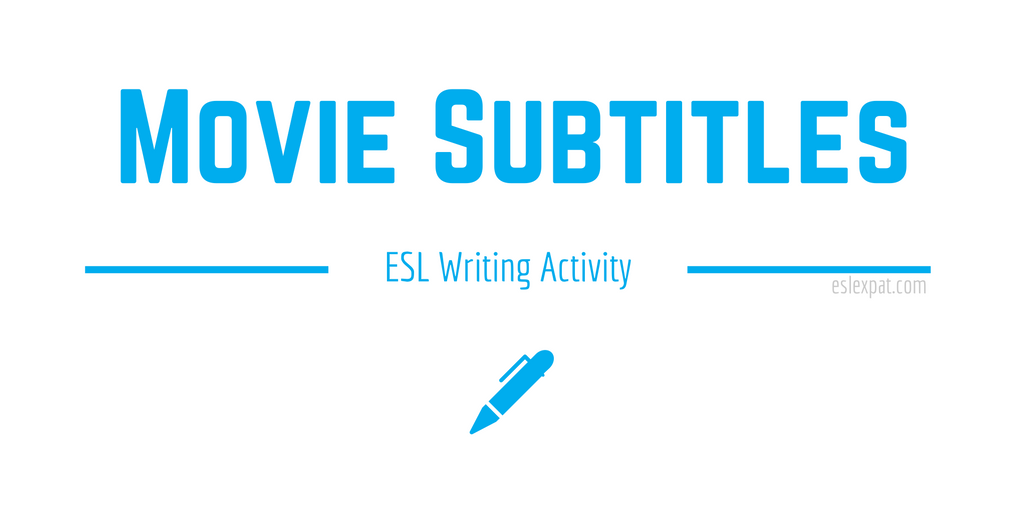 To prepare for this writing activity, research a few movie scenes on YouTube that you think your students will find entertaining. Make sure that it has plenty of dialog in it. You could use multiple scenes from one movie or a series of different scenes from different movies for more variety.

Next, create a worksheet with space on it so that students can enter all the character names on it. Leave room on the sheet for where the dialog can be written beside the characters. Even simple lined paper will do. However, you could customize it a little for your own preferences and lesson aims.

To begin the lesson, you could have a brief discussion about movie genres and perhaps be more specific about famous lines from popular movies. You could even start the class by saying some movie quotes from different films and have groups guess the correct movie and/or character who said it.

Next, hand out the worksheet and introduce the movie scene that you will play in front of the class.

Tell them that you will be playing all of the scene(s) without the audio on. The aim of the activity is to have the students create their own dialog based on what they are seeing. This includes the body language, reactions, and gestures of the characters within the context of the scene.

Note, it is a good idea to model a short example scene and write your own dialog to demonstrate the task to the class. This way, they know exactly what to do.

After modeling an example, continue with the worksheet and play the next scene. Have them watch the whole scene through first without writing anything.

Replay the scene. Pause the scene after a few seconds. Then, have them write out what they think the characters are really saying. The dialog can be as silly, serious or outrageous as they want.

Continue unpausing and pausing the scene until it has come to an end.

By this point, the students should have their entire worksheet filled with their own creative dialog based on what they have just watched.

Next, have them get together in groups and read out what they have written.

After about 5 minutes, have the groups share the funniest or most dramatic dialog from the smaller groups with the entire class.

You could award mini “Oscar” trophies for the best dialog for different genres, like best comedy or drama etc.

Lastly, play the scene again with the volume on and see how the students’ dialog compares to the actual dialog from the film.

Perhaps, ss an extension to the lesson, you could try the Funny or Die Speaking Activity which focuses on building students’ conversation skills. Also, consider the TED Talk ESL Listening Activity to improve listening comprehension.