Have you ever tried playing Would You Rather with your students?

The Would You Rather ESL Speaking Activity is a fun way to get your class more familiar with comparisons and using modals. It is more suitable for intermediate to advanced levels. Both younger learners and adults will enjoy playing the game. 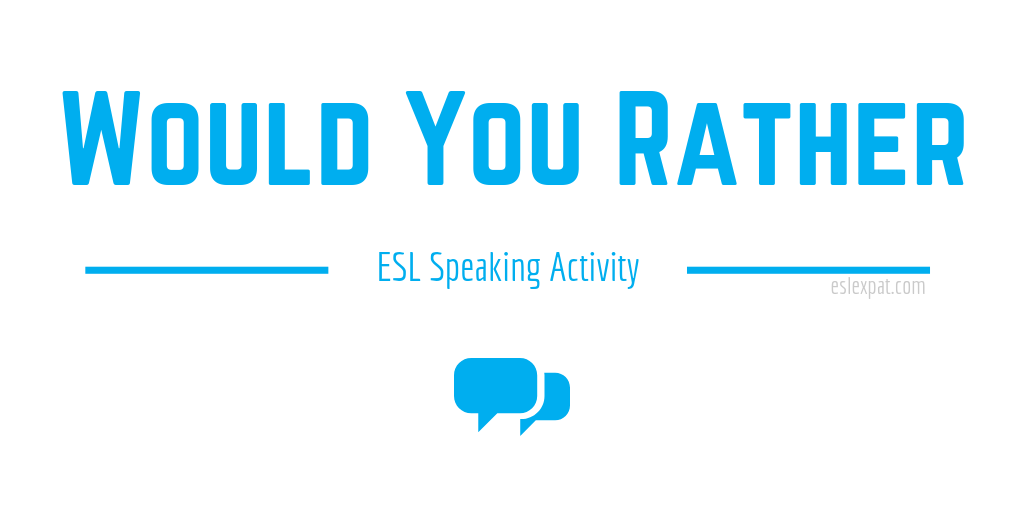 Would You Rather ESL Activity Preparation:

There is nothing required to prepare for the Would You Rather ESL Game. However, you could think of some funny scenarios or stories to tell the students before class. It may depend on the theme that you choose to focus the lesson on.

Read more below for the details.

Would You Rather ESL Activity Guidelines:

To begin the activity, tell the class about the worst thing that happened to you last week.

For example, maybe you were late for work because you slept through your alarm. On the other hand, perhaps you lost your wallet or embarrassed yourself in public somehow. If nothing shocking happened, make something up.

Next, have the students discuss in groups something shocking, funny, or unusual that happened to them last week. Let them talk for 2 or 3 minutes sharing their stories.

After the discussion, elicit some of their answers and stories.

As the students explain their stories, make a brief note on the board denoting the incident. For instance, if someone tells you about how they locked themselves out of their own apartment, write on the board:

“Get locked out of apartment”

Keep the phrase brief and to the point but start each note with the base form of the verb. In the example above, the base form is “get”.

Elicit more stores from the class. Keep writing brief descriptions on the board of each event. By the end of several students’ stories, you should have multiple examples on the board, such as:

Now you will have lots of material and content for the next speaking task.

Model an example for the class and pick to things to compare on the board. For instance, ask a student, “Would you rather get a bad cold or crack your smartphone screen?”

Next, have the student ask you a similar question comparing two actions on the board.

Once the students understand the task, have them do the same thing in groups or with partners. Try to maximize student talk time as much as you can.

Finally, after the students have practiced the task together for a few minutes, elicit some of their funny answers. Again, try to correct any grammar errors and give clear feedback so the students can improve.

As a follow-up activity, you could try playing the Guess Who ESL Board Game for a chance of pace. Alternatively, reinforce some of the vocabulary from the lesson with the Comparatives ESL Vocabulary Game.