Here is another fun movie predictions ESL activity that you can use with movies in which the students have to guess what happens next in a scene. It gets them thinking of some wild and entertaining possibilities that could happen in a movie plot. 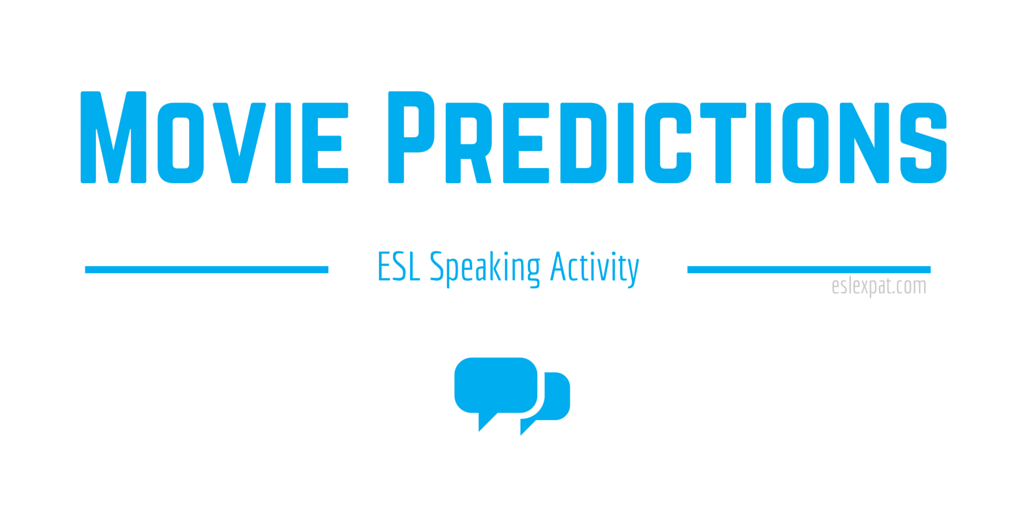 Find a movie online that your class would be interested in and that matches their skill level. Cartoons could be used for lower level students, while any type of movie genre would be appropriate for higher levels.

Make sure that the length of the clip is long enough so that you can use the complete amount of class time necessary. In some cases, sitcoms and TV dramas work best because they range anywhere from 20 minutes to an hour.

At the beginning of class, a good way to introduce the activity is to pretend to act out a simple task yourself. Then, have the students guess what you are going to do next.

For example, walk up to the front of the class with a piece of paper in your hand, crumple it into a ball, and pause. Ask the class what they think you will do with it.

Students say a variety of responses of what they think you will do. After everyone has had a chance to guess, perform your next action.

You could do anything you want. Throw it across the room, sit on it, put it into a cup or unwrap it and write something on it with a pen. Whatever action you do, if one of the students guessed correctly, then award them a point.

After your example, tell the class that they are going to watch several scenes from the movie that you selected and do the same task with it. Only this time they will be guessing what will happen next in the scenes from the film.

Divide the class into teams to make the game more competitive.

Introduce the movie, the characters, plot, setting and give the class any other information about the movie that they are about to watch. Explain details that you think is necessary for them to know beforehand.

Play the first twenty seconds of the first scene, pause it, and do the first prediction for the class. Explain to them what you think the characters will probably do or say next. This will give the students a better idea of what to do when it is their turn to make a prediction.

Next, play the next part of the scene. Pause it again after about another twenty seconds. Have them all discuss in their teams what they will think will happen next. They can brainstorm their ideas for a couple minutes. Then, have one person from each group make their prediction on behalf of their team.

After every team voices their prediction, unpause the clip and play the next section of the scene. Pause it again and give any team a point who guessed what happened in the scene accurately.

Unpause the movie again. Continue in this fashion until the movie is over (or as long as the class time allows). At the end of the speaking activity, tally up all the points and give the winning team a prize.

Finally, at the end of the movie predictions speaking activity, tally up all the points and give the winning team a prize.

As a follow-up activity, you could have the teams act out their own role play if time permits or play the Charades ESL Game.

Alternatively, consider a Timed Reading ESL Activity with a movie review or other related content.