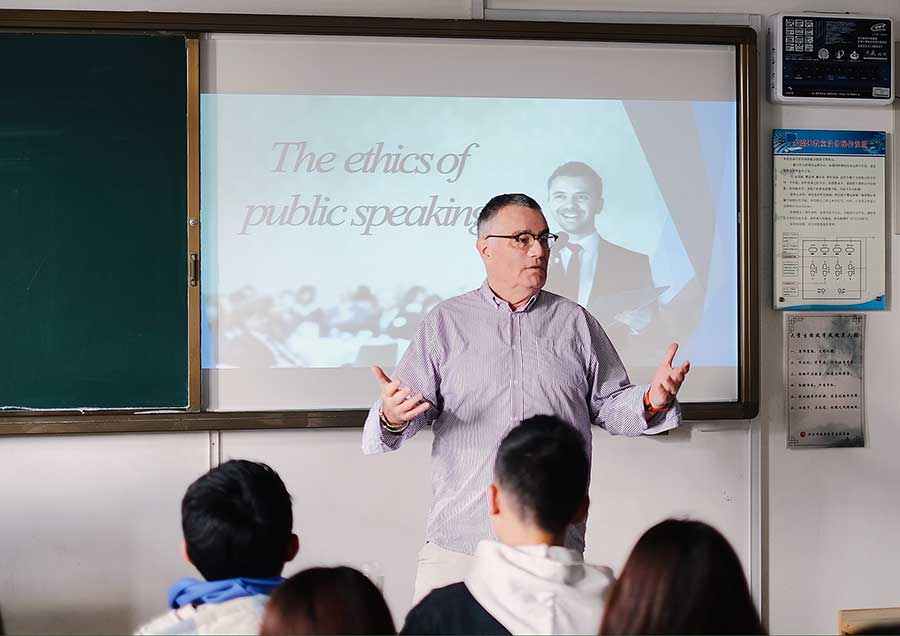 A close encounter of the nasty sort

19th January 2020, and I had just finished three days teaching and judging in the heats of a national speaking competition, the winners of which would travel to Beijing for the final. There had been 300 students competing, many of whom were staying with their families in the same hotel as us on the campus of Zhejiang University. During the Friday and the Saturday, I and a number of colleagues had given classes to packed rooms of over 80+ students giving them insights and help for their public speaking. The speaking test was on the Sunday.

It was during Sunday that the news of the virus in Wuhan had become more concerning, but worse than that was the news from the organisers that around 30 of our students and their attendant families came from Wuhan––ground zero for the virus. As we stood around raising our concerns about this we were told by the organisers that they would track said students and report back to us their health status––they never did.

Hangzhou locked down on January 23rd and I was left wondering if I had the virus, every time I coughed, sneezed, or felt tired raised my levels of paranoia that I had been infected. It also dawned on me that I had also been at an educational event in Wuhan during mid-November 2019, surely the virus was abroad and virulent by then.

Fortunately, I wasn’t infected and we followed the instructions and rules. We had quickly gone to our local supermarket and stocked up with all the zeal of a Doomsday prepper so we were able to see out what, in hindsight, was a remarkably short lockdown.

Teaching during the lockdown

I had only started with the Communications University of Zhejiang in September 2019 so having only one semester under my belt I was keen to start the second semester at the end of the long Spring break. I was soon informed that all the teaching would go online as all the students were stuck in their hometowns. The University recommended we used Ding Ding or TenCent Meeting, both Chinese platforms similar to Zoom. Of course upon opening DingDing, the platform I chose, because it was the most popular amongst students, all the controls were in Chinese. Fortunately, I had been using Zoom for other online teaching and these platforms are much the same so it was easy enough to use.

I was allocated three courses to teach, Oral English to Freshers, Public Speaking to second years and English Writing to a mixed group of ESL foreign students. My previous experience of online teaching was all one-on-one, face-to-face work focusing on IELTS speaking and writing. I had never taught a big class online before. I discussed this with some colleagues and asked questions on Facebook groups and came up with a strategy. My classes would be PPT-based and for the first few classes, I would play it by ear and fly by the seat of my pants, something which ESL teachers often have to depend on.

During the first lesson, I quickly learnt how to judiciously use the mute button. Chinese classes are big, my Public Speaking class had over 50 students. This is a ridiculous number for the physical classroom let alone online. I opened the Public Speaking class and my ears were immediately battered by a cacophony of noise, music, shouts, laughter, and chat as my students who had been apart from each other joyously welcomed each other online. At first, I struggled to be heard until I remembered the mute button. I made them all switch their cameras on so I could see they were all there. At times the bandwidth struggled, other times I think students said hi, switched their cameras off and went back to bed.

I must admit during this time I saw more students in their pyjamas than is healthy. Eventually, after threats of recording the class and passing on bad behaviour to the school office, by about the third class we had reached an understanding. But teaching speaking during which I had to find time for the students to actually have space to speak was always going to be difficult, especially for the 50+ Public Speaking class. But it got done and by May 2020 the university told us it was time to get back into the classroom.

The teachers were invited into the university to be given a demonstration of how to stream our classes via the cameras in the classroom. Of course, this was all in Chinese because myself and another teacher were the only other foreigners in the room. Our English-speaking admin go between did come to the rescue by taking us into the classroom and walking us through the controls on the desktop computer.

By May 2020 some students were back in the physical classroom while others such as those students from Wuhan and other hard-hit cities were online. The foreign students who had gone home for the holidays also joined us online from around the world. So with some of the class in the classroom, some online in their dorms, others in their mum’s kitchen with the family din going on in the background and others having to juggle with the time zone issue we struggled on until finally the semester ended in June 2020.

Come September 2020 all the students, apart from their foreign classmates still stuck in their home countries, were back in the classroom. Unfortunately, this time, as far as I know, the foreign students were not being taught online––not by me anyway. I met some of the second-year students that had been part of my public speaking class and as we laughed about how difficult the classes were, they shook their heads ruefully and told me “We learnt nothing last semester, nothing!” I didn’t beat myself up about that, because in all honesty, it was a mess.

The 2020 autumn semester and 2021 spring semester conformed to the “new normal’ and teaching went on apace in the classrooms. Some students wore masks, some didn’t, but the spectre of the virus faded somewhat as we got on with it. I had over the past few years also been “getting on with it” online teaching IELTS speaking and writing. As the virus spread across the world I saw major changes in my workload.

When I say workload I’m talking about tutoring maybe 3 or 4 students face to face online during my days off. However, as barriers went up and the opportunities to travel to foreign universities disappeared so did my students. Some months saw me with no online IELTS teaching appointments at all. I had a few adult students who wanted to improve their English for their employment opportunities and I saw some adults from Hong Kong who need IELTS to emigrate to Canada, the UK and so on. I was barely making beer money during this time.

At the time of writing, early August 2021, the Chinese government has just announced measures to cut back the activities of Training Schools in China, not allowing them to teach core subjects in the evening, weekends and holidays, nor are they allowed to employ foreign teachers online in other countries. A friend and old teaching colleague of mine in Nanjing has just told me he has been let go by the Training School he works for, a casualty of the new regulations. Whether this will give my online work a boost, as the platform I work for is in Taiwan, remains to be seen.

Back in the university, during the 2021 spring semester I along with the students were given two shots of a Covid-19 vaccine organised by the university and yesterday I received the third shot of the Anhui Zhifei Longcom, as required. This is a relief because we are seeing the virus in the Delta form spread across China daily. As I write it has not yet reached Hangzhou, but Nanjing has been hit relatively hard. How this will impact on the new autumn semester? Who knows?

There has not yet been any official information from the university, but the news has been reporting that students will have to return to university two weeks early to quarantine. I just hope that whoever organises how the universe works makes it so we do not have to go back to online teaching. So I will wait out the remaining four or five weeks of this long holiday, I finished teaching mid-June and I was informed yesterday the start date is September 13th, not knowing what I will be teaching this coming semester.

Hopefully, it will be much the same as the past, six classes a week, 90 minutes each class, but I’ll probably be told a week or so before classes start, so if it’s a new course, I will have to create it on the fly. This is China. It’s a hard life folks, working at a Chinese university. If money isn’t the be-all and end-all of your life, come and try it, you might like it.

Browse English teaching jobs in China on the job board.

Update. I have been told that this coming semester I will have students in the classroom and others from cities struggling with the virus will be online. So I will be streaming classes from the classroom on Ding Ding once again *sigh*