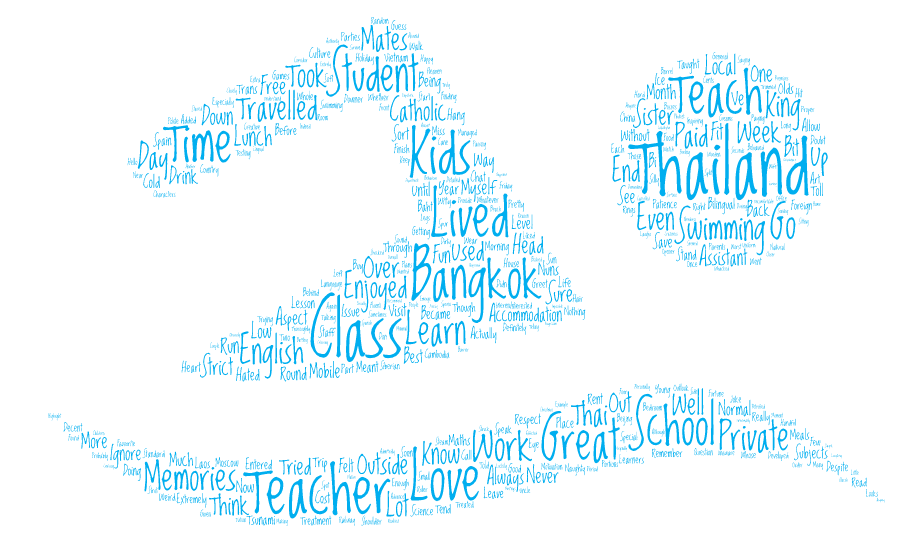 My memories of teaching in Bangkok, Thailand, will always have a special place in my heart. It was while teaching a class of 8 to 9 year olds for 7 months in a Private Catholic school in Bangkok, where I actually became a teacher, and also developed enough patience to be able to teach young learners.

At times I felt like I was living like a king. I was only being paid 35,000 baht ($1,000) a month, but the cost of living was so low that I lived well and even managed to save about $1,500, which paid for a 6 weeks trip back to the U.K, where I travelled through Laos, Cambodia, Vietnam, China, and even took the Trans-Siberian Railway from Beijing to Moscow.

Living rent free in the school’s accommodation also added to my standard of living. I had a decent bedroom in a house pretty much to myself. The downer was that I couldn’t have mates round for a drink or even a chat, and so parties were out of the question.

Despite thoroughly enjoying myself while there, it wasn’t all fun and games. Working for strict catholic nuns took its toll, and trying to fit in as a foreigner was also extremely testing at times.

Interested in finding out more about what I loved and hated about teaching in Thailand, then read on.

What I Loved About Teaching English in Thailand

Without a doubt the students I taught in Thailand were the best I’ve ever taught. I’m not saying they were the best behaved students, at times they were a right handful, and if it wasn’t for my Thai assistant teacher they would have run rings round me on most days. But their general way and outlook on life, and motivation was inspiring. They were always so happy to see me and enjoyed being at school.

They were also extremely respectful. Each morning I would stand outside the class and they would all greet me personally and say good morning, nothing like the kids over in Spain who tend to just ignore me when I walk in class and just finish whatever they are doing on their mobile.

They would also stand up when I entered the class, and always treated me with respect. At least I think they did, my level of Thai wasn’t great, so I guess there was no way of knowing whether they were talking about me behind my back.

On the whole though, I enjoyed teaching all 23 of them, even the naughty ones because of their witty, creative characters.

This is one aspect that I definitely miss. At the start it was weird teaching subjects like Art, Science, Maths, and even swimming in English, but thinking back it was probably a more natural way for them to learn. We had proper English classes as well, but because it was a bilingual private school, these kids, whose parents were paying a small fortune, were learning English through all their subjects.

Teaching this way was an eye opener, and although it took me a while to remember maths and science from school, I soon got the hang of it and actually enjoyed the lessons. My favourite part of the week was swimming on a Friday. The kids loved it too and it was fun pairing up with other teachers to allow the kids let off some steam after a long week.

It might sound a bit random, but those lunch meals were sometimes the highlight of my week. I love Thai food, and being able to have as many portions as I liked meant I was in heaven. Admittedly, I got a few looks from the local Thai teachers as I went up for seconds, but by the end of my time there it was a bit of a running joke. Also, being able to buy ice-creams for about 5 cents and sitting out in the sun before heading back to class was a lovely feeling most days.

What I Hated About Teaching English in Thailand

Working for strict catholic nuns wasn’t a great barrel of laughs. Not only was I uncomfortable with their demanding ways with the teachers, for example, we weren’t allowed to leave the school premises during the day, had to wear a uniform, had to keep our hair trimmed, and provide detailed lesson plans 3 months in advance.

I was also shocked at the authority they had over the Thai students. Most kids used to be petrified of the head Sister. She used to strut up and down the corridor, making sure everything was in order, occasionally sending kids into her office for a telling off.

One of the worst aspects were the silly meetings the Sister would call at the spur of the moment. They were often about nothing and it seemed as though she didn’t really know what she was doing. I remember once she told us off (all 6 foreign teachers) because there were 3 dirty spoons on the work surface.

One Thai teacher even used to cane the kids, which, unfortunately, I was unaware of until I took in one of the naughty kids to ‘speak’ with him. I had to watch my student getting whacked on the back of the legs by a hard wooden ruler in front of the class. Needless to say, I never took anyone to see him again.

Despite the craziness, I actually got a soft spot for the head Sister because in the end she could have saved me from a near catastrophe. I was there in the year of the Tsunami. Originally we had 2 weeks holiday over the Christmas period, so I booked up to go and visit my uncle down in Phuket. Luckily the sister cancelled the holiday, 2 days before, which meant I was in Bangkok when the Tsunami hit, not down on the beach where it struck.

I tried to learn Thai, truly I did, but it was just impossible. For at least 2 months I tried to emerge myself in Thai culture, not speak much English, hang around with Thai people, and tried to get to know the language, but my progression was minimal. My low level of Thai also affected me in class as well. I’d normally have to get my Thai assistant teacher to really sort out any behaviour issues.

I’m fluent in Spanish now, and I don’t know how I’d survive in class, and outside, without Thai while I was there. One reason I left Thailand was because I was never entirely sure of what was going on in class, and especially the staff room with the other Thai teachers. I know there was a lot of criticizing going on, but I could never be sure.

Cold Shoulders From Some Local Staff

One aspect that was indeed baffling was the treatment I got from some Thai teachers. The school was split up into two departments, bi-lingual, where the kids paid extra, and normal private tuition, so there was obviously some sort of class issue in the school.

I got on great with the Thai teachers we worked closely with, especially my Thai assistant and a couple of other teachers. But I’d often get given the cold shoulder, or stared at, or ignored, by a lot of the Thai teachers from the other side of the school.

It normally happened at lunch, while in the playground, or entering or leaving the school. I’d always be polite, say hello, and even wave, but a lot of times I’d get ignored. It was confusing because the students were great, and outside of the school I always found the locals friendly.

Anyway, it wasn’t until the end of my time there that I realised why I was getting this treatment. Basically all the native teachers were earning almost four times the amount of the other teachers. It was then I became more empathetic and could understand, a little, their harsh ways.

Overall though, I had a great time in Thailand, not only in class but visiting the country and learning about another culture. I would have stayed, but I wanted to be in a country closer to home, which I why I’m in Spain now, but I often think of going back with my wife and children and would definitely recommend teaching there.